MOSES SEGALL
As quoted from the article in
Jewish Affairs, Spring 2000 Edition titled " A Jewish family at war: the Segalls of Vlakfontein".
Moses arrived in South Africa in 1894 and set up a store with his brother Avraham in 1897. Moses had to look after the business during the Boer War while his brother was made to stay in Trompsberg. Moses always claimed he was strictly neutral in the war and never bore arms, however he did continue trading with the boers. In March 1901 his store was ransacked by British troops. on the 2nd April he was commandeered by Commandant Hertzog and rode to a rendevous in Kalliesfontein where he found 300 Boers assembled. The commander eventually let Moses go home with a protective pass. However on Tuesday 14 May, Moses fled his home in his cart taking with him his shop notes, clothes , two watches and three gold rings. he stayed at the Metz farm. Early the next morning he was arrested by Lt Cecil Leigh. They took his cart and horses and marched him handcuffed and with one foot bare to Groenvlei. He was searched and 81 pounds was taken from him. Despite his request for a receipt he never received one and was never to get his money back. They had to walk for 8 days to the Orange River Station. Once again he protested his innocence but the British had found incriminating Boer documents on him. on 24 May he was placed on a train for the Cape. He was then marched to a prisoner-of-war camp at Green point Common and two days later was put on the SS Armenian bound for Bermuda. Arriving on 29 June 1901, after a difficult journey, he was transferred to the prison camp on Durrels Island where he remained for 15 months until 7 oct 1902. He always protested his innocence but this was ignored. After his return from captivity he also protested that a number of his things had gone missing " silver watch chain, a suit, 5 shirts, 4 pairs of underpants, one fountain pen and numerous curios in silver and wood that he had made as a prisoner.

Moshe was incarcerated on the island of Bermuda with Boer prisoners of war during the Boer War.  He was kept there for four years with manacles on his hands and feet.  These marks remained with him throughout his life.  He carved napkin rings and other beautiful artifacts while he was there which are still in the family today.   Moshe was caught together with a group of Boers by the British when he went to the country trading animals. Because of the antaganism that Beile his Wife had towards the British she vowed never to speak a word of English and this she maintained.  She spoke Yiddish, Afrikaans and German.  During their married life they moved around the Orange Free State living in Donkerspoort, Trompsberg and then finally settling in Springfontein (not far from Bloemfontein) where they opened a General Store.   When the Nationalist Party came to power the first meetings were held in their home – this is what you call a waare Afrikaner!  When Moshe died in 1929 she continued living in Springfontein  running the store together with her son Abram.

This is quoted from an article written by Richard Mendelson  in the Jewish Affairs, Spring 2000 Edition titled " A Jewish family at war: the Segalls of Vlakfontein".

Joseph Segall received a military decoration for loyal service to the Boers and was known as the Boerejood. Joseph arrived in 1898 as a 14 year old boy. He remembered his father Abraham being one of the best marksmen in the Orange Free State. At 16 Joseph left the Vlakfontein store and joined the Philippolis boer commando. Many jewish immigrants had opted for neutrality in the war or had moved to the coast, but Jack joined the boer forces even when the Orange Free State was occupied. Perhaps it was his youthful spirit of adventure or perhaps his loyalty to the friends he had made in teh district. At first they fought in Philippolis and Fauresmith before joining General Hertzog's daring raid on the Cape Colony at Lamberts Bay in January 1901. Retreating homewards they were pinned against a flooded  Orange river. Joseph volunteered to try and cross the raging torrent. He finally made across and lay unconscious on the side, helped by his friend Andries Schoeman. The others could not make it across and the two set off on foot, Jakkals only in a blanket, and eventually found shelter in the home of Mr Boshoff. When he went back to the battlefield he fought alongside another Jewish fella called Wolf Jacobson and that is how he eventually became known as Jakkals. Both men fought until 1902 when Joseph was shot and captured two weeks before the end of the war. Afterwards he returned to Trompsburg where his father ran a shop. He went on to farm for 35 years in the Smithfield district of the Southern Free State.

This is mentioned in David Saks article "Jews on Commando" http://www.jewishgen.org/Safrica/commando.htm#tn32

Joseph ‘Jakkals’ Segal, only sixteen when the war broke out, became a noted scout in General de Wet’s forces. His best-known feat was to swim the Orange River when it was in spate to bring vital reinforcements to his commando after they looked like being trapped by a large British force 29. De Wet afterwards wrote a certificate for Segal, saying that he had known him well and that he had ‘performed his duty as a burgher faithfully and bravely’ 30. After the war, Segal became a successful farmer in Smithfield and maintained close links with General Hertzog even after the latter became Prime Minister. In the 1920s, when The Friend reported that Hertzog had made an antisemitic speech blaming Jewish financiers for Afrikaner suffering, Segal immediately drove to Bloemfontein to confront him about it and obtained an apology, albeit a private one 31. On another occasion, Segal attended a meeting of the Greyshirts in Smithfield. A big, imposing man, he is said to have stood up and stated “Ek is Jakkals wie vir die Boere geveg het”, which caused the meeting to disperse soon afterwards 32. Segal’s father Abraham and uncle Moses also fought on the Boer side. All three were captured, Joseph after being wounded in what might have been the war’s final engagement two weeks before the final surrender (16 May 1902). ‘Jakkals’ Segal is usually mentioned together with Wolf Jacobson, another well-known Jewish scout and spy in Hertzog’s commando. Jacobson was a bittereinde and saw out the war without being captured

The translation reads "I wish to deliver a message to my fellow Afrikaners. I came to South Africa as a child and always loved the land as if I had actually been born there. I felt that I should do my duty by, and if necessary give my life for, the old Free State. I can only hope and pray that the Afrikaner people will promote those same principles of freedom for all regardless of questions of race or origin as was done in the old Republic. The old-time Afrikaners knew what was right. They were the salt of the earth."

WITH THANKS TO DEBBI SUNDY FOR HER RESEARCH 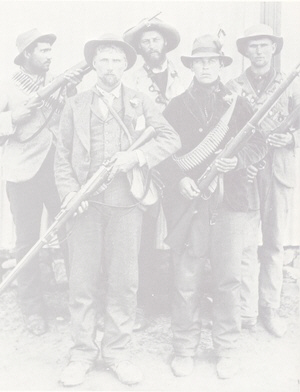